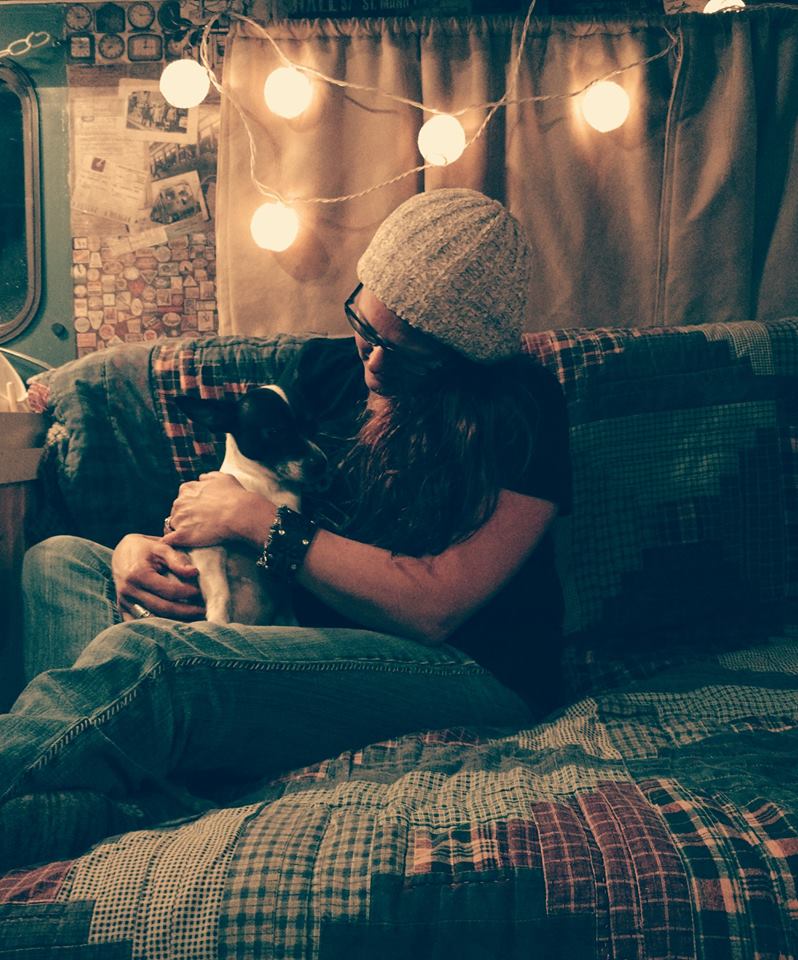 Because of the Internet and email we oftentimes forget that people are real. We forget that the person on the other end of the fiber line have houses of their own. They have hobbies. They have pets. They cook dinner. Sometimes it is even difficult for us to imagine them running into the grocery story at some odd hour to get milk for a next-morning bowl of cereal. But they are, they are real. And perhaps there is no one more real than Angela Alcorn, team member of the Tiny House Jamboree, former dental hygienist, wife, mom, and animal caregiver.

A resident of Oregon (a state she claims is the most beautiful in the nation) but a daughter of the great state of Texas, Angela (or Angie) is a friend of a number of tiny housers, as well as a huge advocate of the small house lifestyle. Beyond that, she is a friend of mine and recently etched out five minutes to spend some time with me.

Angela Alcorn: That’s really a good question. Dentistry has been my sole profession since I was a junior in high school. Before I became involved with the tiny house Jamboree, I was a dental hygienist for 23 years.For the past two years, I have h ad the opportunity to follow my passion for tiny houses. I haven’t really decided on a title for myself. though. My tiny house jamboree business card reads’ Trailblazer’. But if I had to think of a more personal title, it would be…Tiny House Builder Nazi. I don’t know. Are all the questions going to be this tough?

AO: Is that what you intended to be? Do you wake up each day, put on a cape, and fly over to the tiny house world headquarters?

AA: *with a laugh* No. Not really. In fact, my number one role is being mom to my two girls, Gillian and Callie. Turning tiny has been a learning curve for my whole family, but as you can imagine it’s been a huge change for our girls. When we chose to live a simple lifestyle one of our main reasons was to show our girls a different way of life. My top priority is to make sure that our daily life (at any size) is working for them. But yes, I do take pride in being the builder nazi. In fact, I hope to continue my position with the Tiny House Jamboree for years to come. Because of the ordeal we’ve been through with our tiny house builder I want to be involved with bringing quality and excellence to the modern tiny house movement. I want to be someone that helps others as they venture into their tiny house dream, and to guide them in finding a reputable tiny house builder.

AO: Let’s back up a minute. How did you get involved with the modern tiny house movement then?

AA: The story is a little long but I’ll do my best to shorten it. I spoke with Darin Zaruba in January 2014 after having given a presentation at the DFW tiny house meetup group. This was right about the same time EcoCabins announced they were going to be manufacturing the Morrisons tiny house: hOMe. The factory the hOMes would be built at is located in east Texas so this was really cool news to spread at the DFW meetup group. The next day I had a message from Darin letting me know a few people had inquired about a tiny house after hearing me speak. At the same time I had also been wanting to get in contact with Darin to get his advice about a situation we were in with our then-tiny house builder. Soon after Darin and I spoke on the phone and during our conversation he asked me if I was working at the time. I actually was not at the time and before I knew it Darin was asking me about hiring me to help launch the first Tiny House Jamboree. He needed assistance with social media and talking “tiny houses” on Facebook. Pretty quickly, I made the decision to take a break from dentistry and to completely immerse myself into the tiny house world!

AO: So let’s get down to brass tacks. Tell us this tiny house horror story that seems to follow you around like a lost puppy.

AA: Talk about a long story. Not too long ago we uprooted our lives and moved to Oregon where we could play a more active role in the building of our tiny house on wheels. We had chosen to go with Tiny SMART House. Everything seemed on the up and up for months by that point. We connected with the company in January 2014 and we honestly thought we had found the perfect builder for our dream tiny home. We couldn’t have been more wrong. It’s hard to believe we are approaching three years of this nightmare.

Between April 2014 and July 2014 we made four payments totaling $21,000 to our builder. My husband had even moved on to Oregon to be part of the build while I stayed back in Texas to continue downsizing our lives, which included selling our house.

When I arrived in Oregon in October 2014 only a small portion of our home had been built. The builder – Nathan Light Watson – seemed to better at building excuses than houses. We were concerned and felt in our guts that something had was terribly wrong. We couldn’t have been more right!

By Thanksgiving 2014 (and still nothing built), a friend sent me a blog post written by Audrey Addison (Audrey and her partner Tomas had been clients of Tiny SMART House as well) outlining their eerily similar experience. When we read the post my heart stopped! A little further research uncovered two other unhappy clients. We immediately contacted Mr. Watson about the reviews, only to be met with…you guessed it…more excuses! The relationship with our builder instantly became a strained one and we returned to Texas for the holiday season. During that time Mr. Watson cut off communication with us leaving emails and voicemails to go unanswered.

To this day we still have NOTHING to show for our $21,000 even though we filed with the Oregon Construction Contractors Board. We were disappointed to find out though that we were not eligible for his bond because he was building our tiny house in his shop and not on our property.

For now we remain in limbo with no money, no house, and no returned contact from the builder.

Awful story, right? I am just now getting to the point where I can talk about it without shaking with anxiety or getting furious and lashing out. Now do you see why I want to be the builder nazi?

AO: How did you pick up the pieces and keep moving forward?

AA: In January 2015 when the situation with our builder came to a grinding halt we were essentially homeless. We had nowhere to live and now we had no house. Our dear friend Julie opened up her home and gave us a place to live. Meanwhile, our girls were getting settled into their new schools, my husband and I had fallen in love with Oregon and most of all, we weren’t going to give up on our tiny house dream. We did what any committed family would do. We bought a 1984 26 ft. motorhome for $2,000 on Craigslist. Perfectly sane, right? Fortunately we were already in talks with a landowner where we had planned on parking our tiny house. When he heard the news of our situation he welcomed us on to his property, not with the cute little tiny house like he was expecting, but with our new, revised tiny adventure. Julie came to the rescue again and welcomed us to stay with her as we fixed up the RV. She continues to be our home away from home and has become a core person in our life. Mr. B – the landowner we currently lease from – not only gave us a place to park our new home but he was also my first glimpse of what was to become many more blessings in our journey.

AO: So where are you now? And what of this “husband”? Where does he fit in?

AA: I guess that is a pretty essential part of my story. The “husband” is my brilliant husband Bobby. We’ve been together for 15 years now and we have been on the same page since day one. He is my eternal sidekick and through it all we’ve both recognized the benefits of living a simple life. In fact, it will be two years this April that we’ve been parked on Mr. B’s land. Yes, we’re still in our (remodeled and revamped) 1984 EcoLodge Motorhome. We have the most beautiful view of the Three Sister mountains and the most spectacular sunrises over a 35-acre grass seed farm. Where we are is home for now but we’ll see where life takes us next. Our journey continues!

AO: Where do you see the modern tiny house movement going over the next few years?

AA: The tiny house movement is here to stay as long as we continue to push progress legally and socially. I know many consider the tiny house movement the latest “trend” but I don’t see this lifestyle choice as just a trend. Most people that are adventuring into a tiny life are looking for something other than the “routine life”. They’re looking for meaning and a true purpose as to what life is about and the intrigue of a tiny house and owning your home opens up so many options!

The final part of our interview is inspired by Inside The Actor’s Studio and James Lipton’s final questions:

What is your favorite word? Happy

What is your least favorite word? Tiny or Moist

What turns you on creatively, spiritually, or emotionally? When I know what I’m doing will help another person in someway.

What turns you off creatively, spiritually, or emotionally? The gray Oregon winter What sound or noise do you hate? “Whining” kids or an adult

What is your favorite expression? Just 5 more minutes

What profession other than your own would you like to attempt? Woodworking

What profession would you not like to do? Anything that has to do with heights!

If Heaven exists, what would you like to hear God say when you arrive at the Pearly Gates? Your Dad’s been waiting on you…